What is Topical Steroid Withdrawal?

Topical Steroid Withdrawal (TSW), also known as Red Skin Syndrome or TSW skin, is a term that describes a group of related skin conditions. It can occur when there is a gradual or abrupt cessation of prolonged use of topical corticosteroids, usually of mid to high potency. It has several other names, but the most common ones are Topical Steroid Addiction and Red Skin Syndrome. Topical steroid withdrawal is described as a syndrome because it is an umbrella term for several other related skin conditions. It is commonly characterized by symptoms such as rashes, redness of the skin, burning or tingling sensation of the skin, skin flaking, edema, oozing pus secretions, skin peeling, and a host of others. The effects of steroid withdrawal are often more severe than the condition the steroids were being used to treat.

The TShealing process of topical steroid withdrawal is not linear. TSW stages can come in different cycles as the body needs time to repair it's immune system, nervous system, and natural skin barrier.

What are the Stages of Topical Steroid Withdrawal?

There are no hard and fast rules in the progression of topical steroid withdrawal. Oftentimes, management is done on a case by case basis. Even though the phases of Topical Steroid Withdrawal have been outlined, a person's skin might not follow the sequence exactly. Each person has their own peculiarities and unique healing journey. For instance, a person could have one stage of topical steroid withdrawal in one part of their body and another stage in another part. A person could also have two different stages on the same part of their body.

The most important thing is to be consistent with the care of your skin and be attentive to its needs and wants. For instance, this could mean being aware of what triggers flare-ups for you. There are some common ones, but there are also some that are peculiar to some people and alien to others. Learning about the stages of topical steroid withdrawal and how they appear is one way to educate yourself about your skin. You may have seen some of these stages and phases on your own skin. In this article, you will find out exactly what they are. Here are the Stages of Topical Steroid Withdrawal, simplified for ease of understanding.

Note: The photos below are used with permission from Jing Rui, who also suffered with TSW skin for many years. 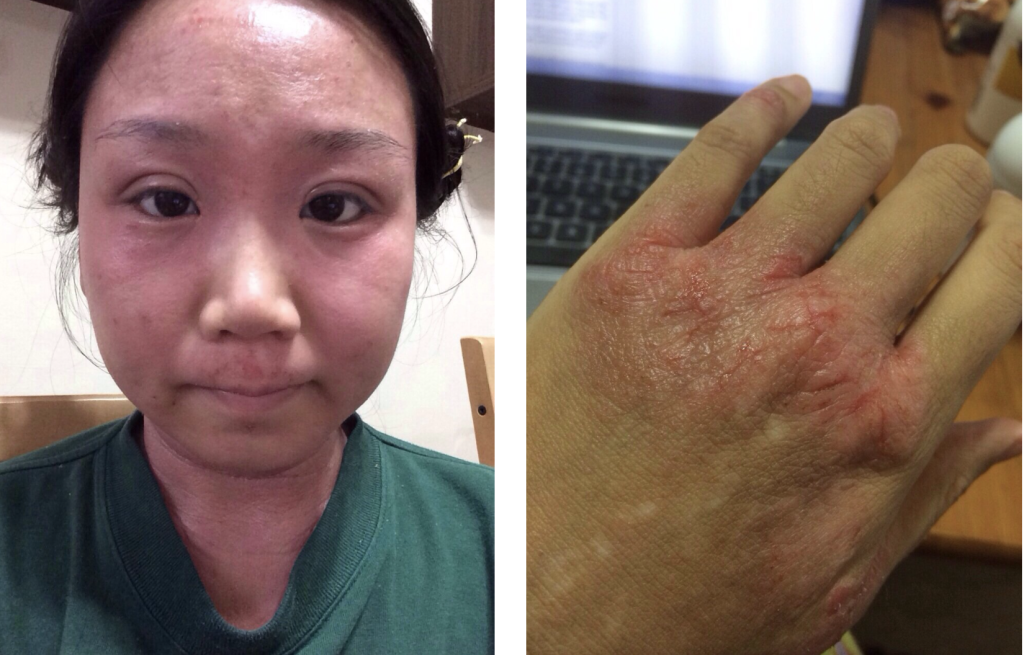 Inflammation is defined as the response of a cell to a noxious stimulus beyond the point at which the cell can tolerate it. It occurs at the beginning of every flare. It is characterized by redness of the skin in lighter complexion, warmth to touch, pain, swelling, and feelings of general weakness. Hives are also a form of inflammation, but a later form. They occur on skin that has acquired some strength. It can often be a sign of healing.

Inflammation is especially common if you are just beginning your withdrawal journey. If you have been on your withdrawal journey for some time and you experience this, it means you are having a flare-up. Blood is rushing to affected areas of the skin in order to prepare for the healing process to take place. 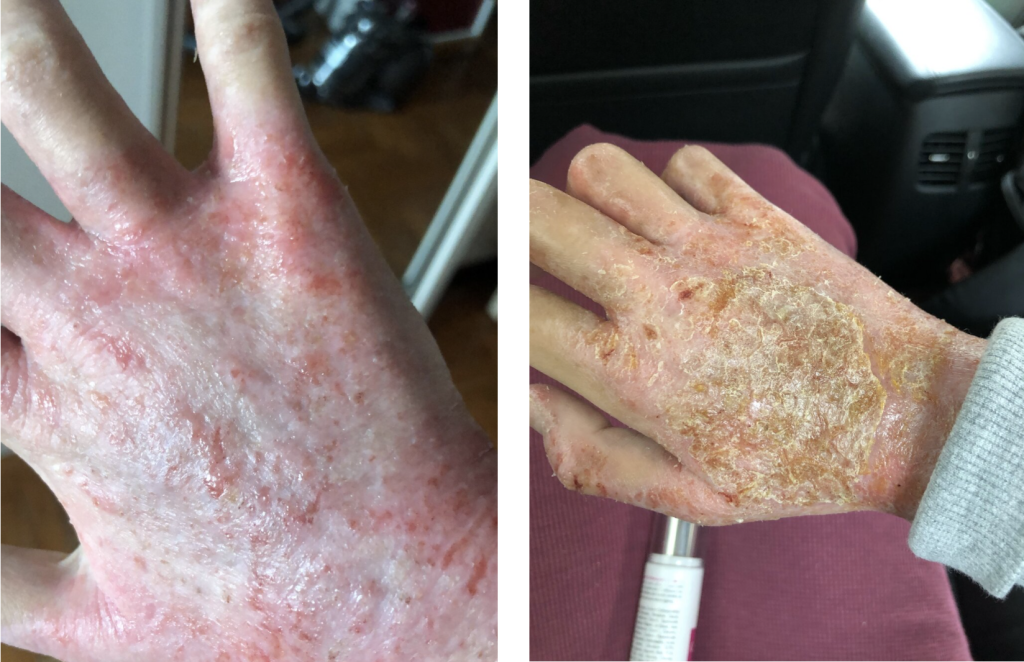 Exudation is simply the formation of pus. It occurs when a person’s body has become addicted to topical steroids and is in withdrawal. It can also occur when a person's skin has been infected by bacteria.

Pus is made of cellular protein in cells. When exposed to air, cellular components of the pus undergo oxidation to form thread-like substances. These thread-like substances form a mesh that hardens and appears on the skin as a crust or scab. The formation of crusts or scabs prevents more bleeding from the wound and protects the wound to allow new skin to form underneath.

Crusts and scabs can repeatedly break to release more pus and appear to ‘ooze’. This is because they are very weak structures prone to breakage. As much as possible, try not to move areas with crusts and scabs around too much so that they can harden without breaking up. 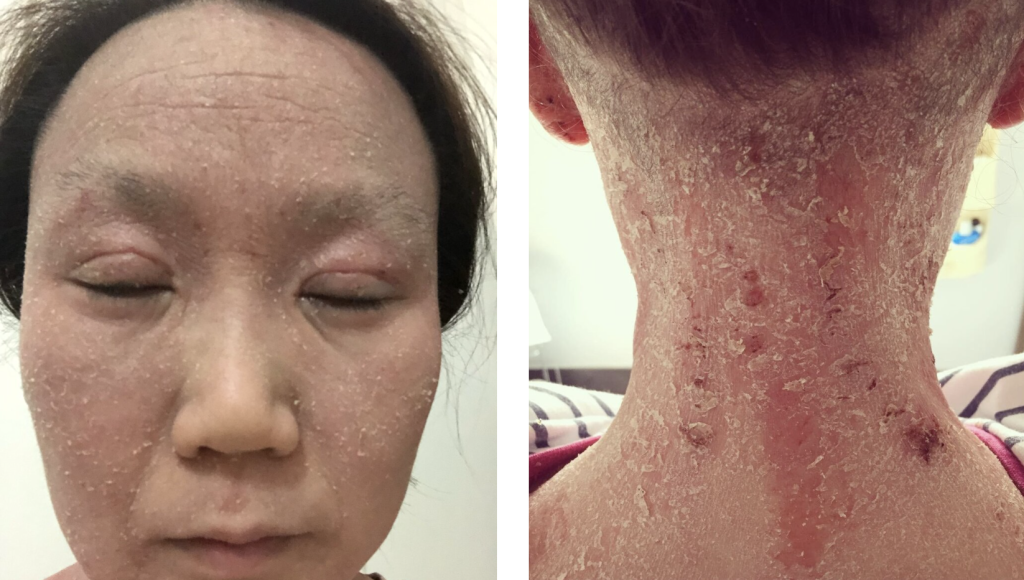 The Proliferation stage is the skin flaking stage. It can be considered cosmetically unappealing, but very necessary for the healing of the skin.

At this stage, the cells of the skin are trying to rebuild the basement membrane of the skin. As such, they migrate to the sites of the wounds and proliferate there. This is what we see as skin flaking. Several skin layers are formed beneath the surface. When they get to the top, they flake off. It is almost as if the skin cells form new layers beneath the surface and if the cells are not healthy or strong enough, they get to the top and flake off. This process will continue until the skin cells form a layer that is strong and healthy.

The remodeling stage is the stage at which wounds begin to contract, pulling the skin towards itself. This is noticeable by thin lines surrounding the wound.

At this stage, collagen is being formed in an effort to strengthen the skin and return it to its normal strength and elasticity. This stage is more obviously spotted at folds in the skin such as the bend in the elbows and knees.

All 4 stages are commonly experienced in topical steroid withdrawal, however, there is no exact time period of how long each stage can last. This 4 stage withdrawal process can often repeat and be cyclical, depending on the severity of skin flares.

The following symptoms can be experienced during topical steroid withdrawal:

The skin is the largest organ of the body and it needs time to heal, especially after a long period of steroid damage and a suppressed immune system. In the case of topical steroid withdrawal, the time it needs to heal can vary very much from person to person. There is no specific timeline - The skin of one person could take 6 months to heal completely. The skin of another person could take up to three years. Besides the individual nature of this condition, other things that could make the timeline vary from person to person include:

A person experiencing topical steroid withdrawal must also understand contributing factors to the underlying skin issue of eczema. Eliminating factors known to cause flare-ups can assist in reducing inflammation and speeding up the healing process. Such factors can include food intolerances, chemical intolerances from laundry or washing detergents, and more.

Our Mission at TSW Assist